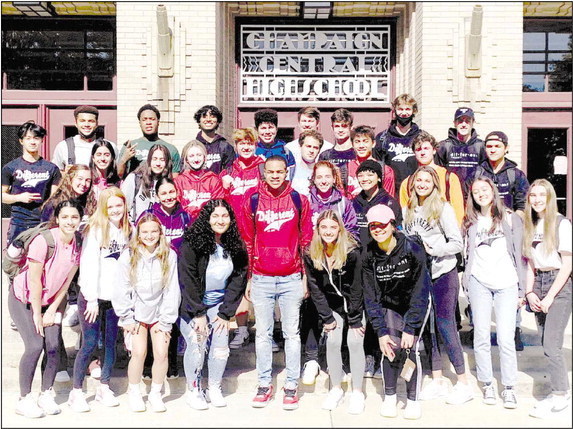 CHAMPAIGN — After 10 months of quarantine, with a lot of time on his hands, Dwayne Hubbard Jr. needed something to break the monotony. Something different.

So the Central High School senior got literal: He ordered a T-shirt for himself with the word “Different” emblazoned on the front.

“If you’re different, it means you stand out,” Hubbard said. “People always want to be different.”

But as he sat with the word for a little while longer, he realized the concept could have wider appeal.

Hubbard thought of who else the word “different” could stand for: the folks who don’t fit in, who may get singled out for th eir size, ethnicity, sexual orientation, everything else.

“I just think, with everything going on in this world, I feel like everybody should be welcome,” Hubbard said.

>span class="Fid_16">From his office space in Champaign, he crafts T-shirts, hoodies, tracksuits and accessories, all featuring his very own “Different” brand. He sells items through his crafted website and socialmedia pages, available for shipping, delivery or pickup.

“Business is going good, honestly. I’m getting a lot of support from peers and family members,” he said.

Hubbard recently completed a big order for his classmates at Central High, who floated the idea of wearing his branded clothing for Spirit Week.

>span class="Fid_16">“It was a time squeeze. It probably took about four or five hours to make all the T-shirts after school,” he said.

Community figures like some Unit 4 teachers and even Champaign-Urbana Public Health District Administrator Julie Pryde have picked up merchandise. Pryde wore a “Different” shirt in a televised news interview.

Hubbard works on his business every day. Between school and basketball open gyms, he’ll head straight to the office, keeping track of his inventory and working with the heated printing station in the building, pressing his logos on to some ordered fabric.

His next order: about 60 T-shirts for students and basketball players at Franklin Middle School, where Hubbard graduated from and where his dad coaches some of the teams.

His father, Dwayne Hubbard Sr., who owns DVH Management Co. in town, and his sister, Destiny, helped the senior get started. Different is run under the umbrella of his dad’s business, where his son now serves as chief operating officer. (He has his own plaque.) Last academic year, the younger Hubbard would stick around his dad’s office while learning remotely. His father said seeing him back in the office working on his own venture is a dream come true.

“When he went from sitting in the corner to actually promoting him to his own office space, and seeing him walk on out of here

and make some big moves, I’m really proud of him,” Hubbard Sr. said.

When it was clear that his son was taking his business seriously, with a concrete vision, Hubbard Sr. provided him early financial support. He’s tried to instill the value of customer-first service in his son — Hubbard Jr. keeps track of bills, taxes and everything in between.

And when the business started getting traction, Hubbard Sr. was in disbelief.

“When everybody from all different walks of life — White, Black, LGBTQ+ — was buying the shirt, I was like ‘Wow,’” he said.

Hubbard Jr. plans to go to college, hopefully playing basketball, to study business while running one of his own.

“My plan is to keep getting the message out — I want to grow to 50 states, I want to be everywhere,” he said. “I feel like I can be a big influence to a lot of people my age.”

One of the reasons for his urgency, Hubbard Jr. said, is he thinks a message of acceptance can go a long way from someone young, like him, with a growing platform.

“There’s a lot of people my age who don’t make the best choices because of the people around them,” he said. “And I feel like me as a leader, I need to lead on to them that you can always do something and have a good impact on people.”